Every Round One Clash Of The 2020 AFL Finals Series Analysed 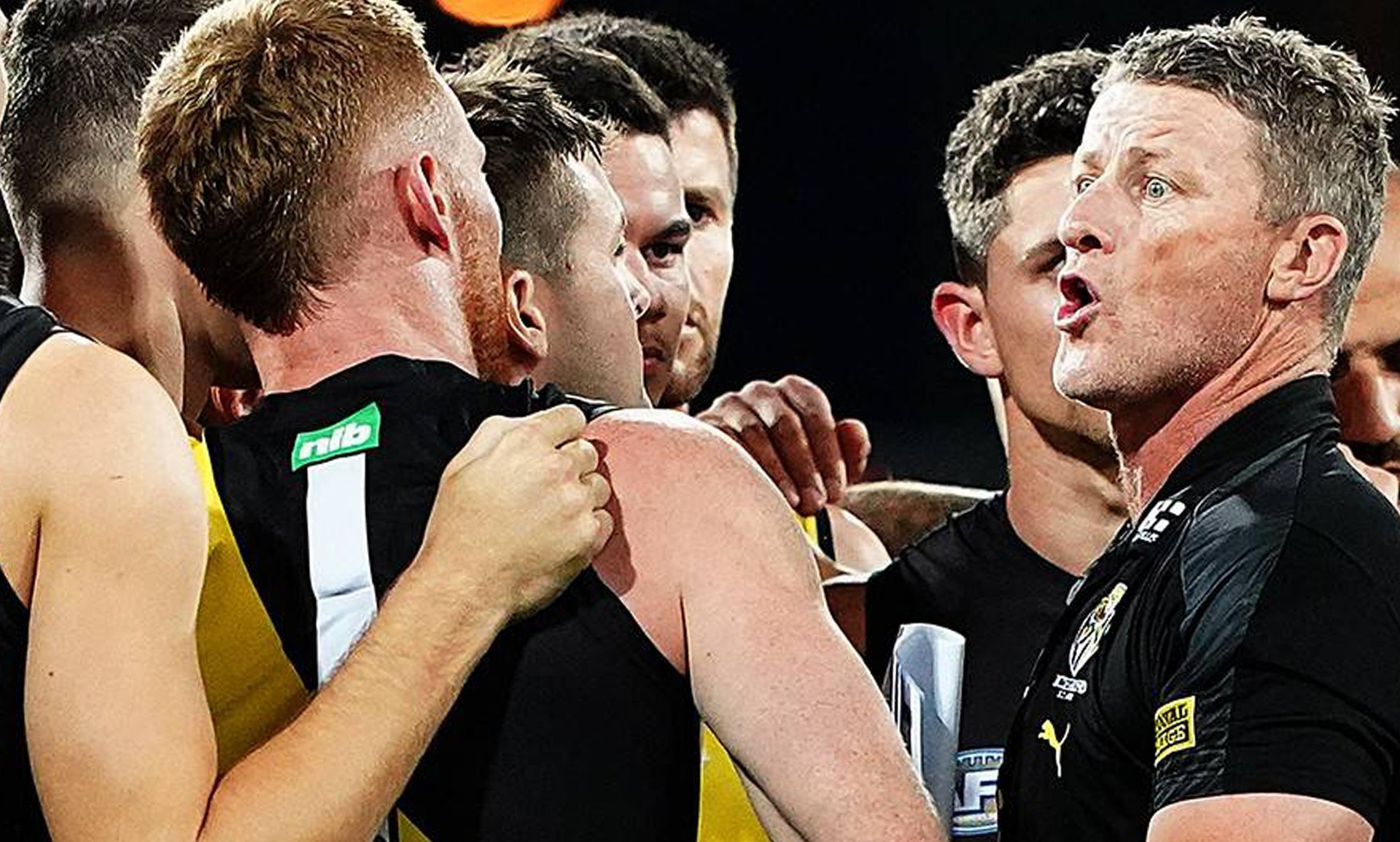 What a year it has been. For some, 2020 held so much promise, for others the lessons learnt have been a long time coming. One thing is for certain—the AFL community has gritted its teeth and banded together to produce a strange and exciting season like no other. As we find ourselves on the eve of a unique finals series, the noise around it is drawn to reflect on the year that was and how this beautiful game became even more important to the livelihood of its unwavering and loyal fans.

In a year defined by uncertainty, footy has remained the constant. From the outset, AFL fans looked to two tall figures to give us our news updates, and help plan our weeks, months, and eventually, our entire year. As a tired and under slept Premier Dan Andrews wielded himself to the daily media contest, an equally dishevelled yet resolute AFL CEO Gillon McLachlan did the same, preaching patience and speaking in unfamiliar terms. As the landscape was unfolding, “Gill” called on fans to stay calm and clubs to be flexible, as all 18 competitors stealthily streamlined their football departments, packed their bags and headed for “hub life” in an unfamiliar interstate location. The message was simple: this will be a challenging year but the footy show must go on.

And go on it did. We say it every year, but this year has really seen it all. Both on and off the field the AFL community has had to adapt to its new landscape. The changes were immediate and drastic. Firstly, it sounded different. For many clubs Round 2 onwards saw significantly reduced crowds, or in most cases, no crowds at all. It also looked and felt different. Aside from shorter quarters and more games in succession, aptly referred to as a “Festival of Footy”, there was an air of abnormality to the games themselves. More injuries and surprising results were predicted, but no less nerve-wracking for fans glued to their television sets night after night, clinging to the game they love like a life raft of normality in a volatile sea.

In amongst these drastic changes, some things never changed. As with every season, young clubs with equal amounts youth and talent continued to improve in Carlton and Gold Coast, and new coaches in Adelaide’s Matthew Nicks and Fremantle’s Justin Longmuir had to find their feet, and find them fast. The once powerhouse clubs of the mid – late 2000’s, Sydney and Hawthorn, found themselves at the crossroads, winning enough games to keep their experienced coaches employed whilst busily denying calls of “a rebuild”, the equivalent of AFL no man’s land. 2020 proved it can still be lonely at the top.

Then there were the utter disappointments. This year’s pre-season predictions saw Essendon and Melbourne in most commentator’s top 8, but both clubs managed to stumble their way out of contention as the season progressed. Similarly, as soon as last year’s Grand Finalists, the Giants, were touted as premiership favourites they were falling apart, summed up in a consistently arrogant move by dropping their captain on the eve of a chance to cling to a final’s spot. And then there is North Melbourne. As soon as Reece Shaw’s boys finished second last they immediately delisted 11 players and kicked a cult hero out the door. Need I go on?

During this pandemic the AFL competition has come to represent so much more than sport, and this finals series reflects this feeling. For all the changes 2020 has brought the game we love, make no mistake, the winner of this premiership will go down in history as one of the greatest

On the eve of the 2020 AFL finals we look back on a season like no other and predict what this finals series could mean for the eight clubs fighting to become the incomparable 2020 premiers.

Here are our predictions for the first week of the 2020 finals series.

In a nutshell: The Ultimate Test

This finals series kicks off with what some have dubbed “The Ultimate Test”. Port Adelaide have done what many thought was impossible and finished as the minor premiers in a year that should have belonged to a more “reliable” club. When most predicted a swift fall from grace, they remained stoic until the end. A sign of some much needed maturity. Led by a rejuvenated older brigade in Charlie Dixon and Travis Boak, Ken Hinckley’s club have done what they haven’t since their glory days; learnt to win.

On the other side, we have the seasoned campaigners in Geelong. Just like your favourite 90’s sitcom, Chris Scott’s Geelong side may be old but they bring it every time. The recent history books will tell two things about this club: they never the miss finals and they never perform in the finals. If they are to go all the way, it has to happen this year. 2020 has revealed the worth of experienced players with Tom Hawkins and Patrick Dangerfield as two of the most potent players in the league, and I think they will get it done in this first elimination final.

Our Prediction: Geelong to beat Port Adelaide by 12 points

In a nutshell: No Lynch, no worries?

We have to hand it to Brisbane coach Chris Fagan, he has proven to be no slouch when it comes to building on the success of last year’s promise. The danger of a possible over performance one year, is the potential under performance the year after (cough Melbourne) but this has not happened for this young and talented Brisbane side. This team has the makings of a dynasty. Much like their opponents in 2017, they have the the best player in the competition in Lachie Neale, a perfect mix of youth and experience, and a “plug and play” system that works: “We aren’t the Harris Andrews Football Club”. (C Fagan)

For last year’s premiers, Richmond the second half of the season has an air of déjà vu about it. Their last loss was at the hands of a formidable Port Adelaide in Round 11, a wake up call that has since yielded a winning streak of six with an average margin of 30. In that time, they have uncovered new talent in Jake Aarts and Shai Bolton to bolster their seasoned veterans in Grimes, Lynch, Reiwoldt and Martin. While the black and yellow know their way around a finals series, pressure is mounting on Jack Reiwoldt to fill a significant gap in the Tiger’s forward line. Brisbane are known for missing opportunities in front of their goals, so it’s still safe to say the game is still firmly in the Tiger’s grasp. It is theirs to lose. But they won’t.

Our Prediction: Richmond to beat Brisbane by 25 points

In a nutshell: Battle of the underdogs

This is where things get interesting. Next to minor premiers Port Adelaide, St Kilda have easily been the surprise packet of 2020, making their first finals appearance since 2010. Coming off the back of one of the most active trade periods in recent history the club brought in experience Patrick Ryder, speed in Dan Butler, class in Brad Hill and universal adoration in coach Brett Ratten, in an attempt to rejuvenate a club in danger of becoming frightfully irrelevant. The results were immediate but not without drama as the saints flirted with form before securing a spot in the top eight. Classic under dog behaviour.

Speaking of flirting with form, the Bulldogs managed to break away from the underwhelming cluster that was the race for seventh and eighth spot in nail biting fashion. Like Melbourne and Essendon, with five rounds to go, no one really knew what to expect from Luke Beveridge’s outfit, but therein lies the danger. With Marcus Bontempelli, Caleb Daniel and Jack Macrae in career best form, this is a club that remembers the glory of 2016 like yesterday and will use it to their advantage, perfectly comfortable with being underestimated in a season such as this.

Our Prediction: Western Bulldogs to beat St Kilda by 7 points

In a nutshell: A Battle of the Battered and Bruised

Finally, the ultimate elimination final from two clubs that are probably happy to see the back off this season once the dust has settled. At one stage or another both clubs were seen as either premiership contenders or thereabouts, out to prove their place in a final eight full of fresh faces. After starting the season in horrific fashion, West Coast were able to steady the ship and do what they have done for the best part of a decade, comprehensibly beat the sides below them. A rejuvenated Nic Nat was aided by the incredible feats of Liam Ryan, whilst new recruit Tim Kelly was the powerful addition everyone expected. Despite a cloud of injury woes and doubts around durability, they are not to be underestimated on their home deck.

For Collingwood, 2020 was like any other season really. A year full of bizarre off field incidents, serious injuries to star players and never ending contract speculation. Yet from the ashes Nathan Buckley was able to uncover serious young talent in Quaynor and Daicos, consolidate new leaders in Maynard and Adams and establish Darcy Moore as one of the best key defenders in the game, all whilst keeping the black and white juggernaut afloat. Ravaged by injuries to key finals performers can be seen as disadvantage or an opportunity for the new brigade to make their mark. The question for Collingwood is not if they can make it, but how.