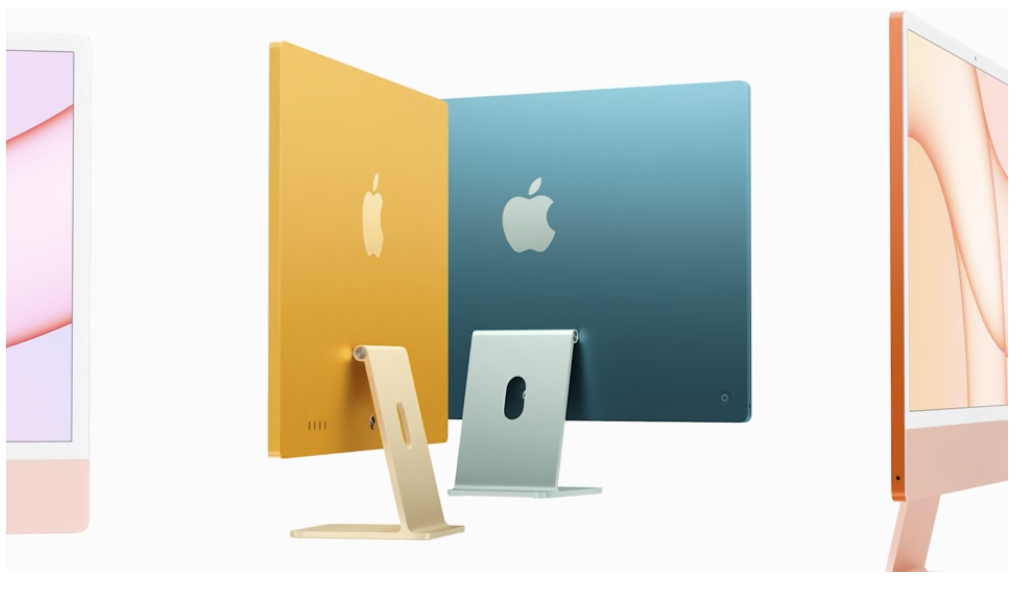 Apple’s ‘spring loaded’ 2021 event opened with colour and sunny skies mirroring the opening message, ‘after the challenges of the past year we’re optimistic that brighter days are just in front of us.’ A sentiment that I’m sure we can all get behind. The lineup for the event included new products such as the Airtag, and upgraded icons of the iMac and iPad Pro. The event centred around the idea of optimism and colour, particularly with the new vibrant iMac. Although the exception was the iPad Pro commercial reel, with a sequence cut from Mission: Impossible, where Apple’s curly-haired version of Tom Cruise’s face is peeled off in the end to reveal Tim Cook, the CEO. It was wild, you need to watch it.

Besides the creative marketing, the real star of the show is the inner workings of the new products, the M1 chip, which was first introduced last year for the MacBook and MacBook Pro. The M1 is the first chip designed specifically for the Mac (and now the iPad Pro!) and Apple has gone all out to make the most of the supercharged breakthrough. For a quick rundown, the M1 chip is an 8-core CPU, GPU and 16-core neural engine all wrapped up in one. But for those less tech-savvy, all you need to know is that it’s pretty much everything from those big clunky systems into a single little square. Like the M1, the new products are much more powerful while much smaller in size. Which is several leaps forward in Apple’s vision to ‘make the computer disappear.’

Minimalism is in style after all and not just for our tech, Apple’s reduced carbon footprint was heavily focused on the event too. As we move forward focusing on the Earth we walk on, it’s nice to see our staple brands making the conscious leap too. Apple’s worldwide operations became carbon neutral in 2020 while also making the commitment that by 2030 all their products will be too, which is a massive goal. By sharing these approaches Apple aims to send a message to their partners and invite them to work together for a greener future. These commitments themselves range from the reduction of single-use plastic in packaging to responsibly sourced and recycled materials within the products themselves. Which is awesome but where do we come in? With an initiative that isn’t necessarily new but helpful nonetheless, Apple Trade-In. By giving Apple your old devices when you upgrade your tech, you’ll receive credit towards a new device or an Apple gift card. So now you can upgrade without the environmental guilt. Speaking of that itch to upgrade, let’s dive in.

The main attraction is the new iMac which is a minimalistic dream that fits into every workspace. At just 11.5mm it practically disappears when looking at it from the side, and from the front, it has a 4.5k retina display on a 24-inch screen with true tone colour for a more natural viewing experience. It comes in 7 striking colours that from the back have a vibrance that is reminiscent of the iPod Nano (the real ones remember), while the front is a soft neutral colour. With the M1 chip, it’s the multitasker’s dream, not only with apps but for those chaotic tab hoarders you can browse safari with hundreds of tabs open at once. The iMac is also fitted with a 1080p facetime HD camera so you can Zoom into meetings looking your best.

The iPad Pro is now the best tablet on the market thanks to the M1 chip. Staying with the theme of small yet powerful, the iPad Pro has an 11-inch screen that’s just 6.4mm thin, with over 10,000 mini-LEDs on an XDR liquid retina screen. New features also focus on the concept of staying connected while apart with the ultra-wide camera that keeps you in centre stage as you move around. Perfect for multitasking while on camera, and off camera too with the iPad Pro’s portable size, 5G capabilities and power of an all-day battery you can carry it around anywhere you go.

The Airtag is new to the Apple family, perfect for when your couch eats your keys. The small disk connects to your iPhone to help find anything you’ve lost if it’s attached of course. You can choose to listen out for the ping sound or use Precision Finding which is like a treasure hunt showing distance and an arrow on your screen. If your backpack was a casualty left behind, the Find My network brings every iPhone user together as a search party, showing where it is on a map. But don’t worry it’s completely anonymous and only you can see your Airtag. It comes in a single disk or a pack of four so you can use one just for your keys or grab four to keep all your important belongings in check.

The Apple TV 4k smart box is upgraded with an A12 bionic processor with the power to watch your favourite shows and movies with a higher frame rate. It pairs with your iPhone to calibrate the colour balance for more true colour, it also pairs with AirPods for a late-night cinema session experience without lowering the volume. It also has Dolby Vision support. Included with the box is the new Siri remote so you can easily ask Siri to put on what you want to watch. Of course, this only works if you are a decisive person and don’t spend ages scrolling through the endless options while your dinner goes cold.

Last but not least is the iPhone 12, while nothing has changed it now comes in purple! We have a breakdown of the iPhone 12 models here.