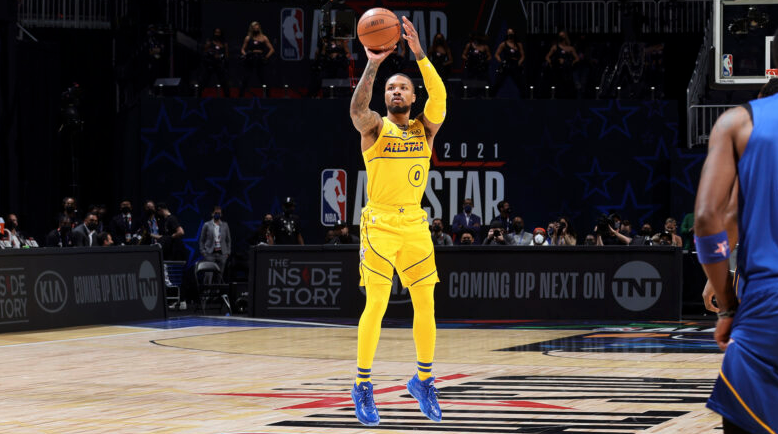 Dame time, Greek Freak, King James and Curry. No one stood a chance.

There was certainly some highly vocalised criticism and disarray within the league-leading up to this seasons All-Star Game. Lebron James called it a “slap in the face” for the NBA to hold an All-Star Game in an already compressed 72-game season just two months after the 2020-21 season ended in the quarantine bubble. James had said he has “zero energy and zero excitement about an All-Star game this year.” James represented a large portion of the league leaders who had also questioned the validity of having an All-Star game. However, in the midst of this controversy, Lebron seemed rather jovial in TNT’s All-Star Selection broadcast. Additionally, this humorous demeanour appeared to carry over onto the court as Lebron and the rest of the All-Stars were all smiles as they played their hearts out.

The 2021 NBA All-Star game shared the same competition format as the 2020 NBA All-Star Game. Each team competed to win each quarter which would result in a charitable contribution towards respective beneficiaries. The fourth quarter was untimed and each team played toward the target score of 170, meaning the game would end when either team reached 170 total points for the game. This number is attained by adding on 24 point to the total score by the end of the 3rd quarter, honouring the late Kobe Bryant, who wore the number 24 for the last 10 seasons of his career.

This years format seemed to fail to deliver the nail-biting fourth quarter we were graced with last season in Chicago at the 2020 All-Star Game. However, there were some highly invigorating stat lines and performances which we were lucky enough to witness.

Curry and Chris Paul (CP3) put on a spectacular show of small ball poetry as they traded alley-oop dunks with one another in back to back plays in the second quarter. After years of competing, Steph Curry and Lebron James finally joined forces in this year’s All-Star Game, and they did not disappoint. Having these two on the same team was simply unfair. It seemed the result was already written. Not to mention the likes of Giannis Antetokounmpo, Nikola Jokic, and Luka Doncic starting alongside them.

Giannis’ optimism regarding the success of team Lebron was well surmised in a post All-Star selection interview,

Giannis’ prediction was on point. Not only this, but he was the proud recipient of the NBA Kobe Bryant All-Star MVP Award after putting up a historical performance of 35 points on 100FG%. Each shot he took was built with suspense as everyone watched on praying he wouldn’t blemish his perfect scoring record in-game.

Lillard and Curry did what they always do, using the All-Star stage to showcase their notorious lethal range, likely a precursor of what to expect in the next half of the NBA season.

With the game at 167-150, team Lebron’s way, Steph attempted the game-winning half-court three but fell just short, leaving Dame sinking a half-court of his own, closing it out and giving us a memorable finish. Dame Time and Steph put on a remarkable shooting performance as they continually shared some bombs from long range. Dames 32 pt performance off the bench consisted of his fair share of long-distance threes – a showcase which evidently warranted a redaction of sorts out of his All-Star teammate Paul George who, in the past, has gone on record criticising Dame’s audacious shot taking. In the 2019 playoffs, Lillard’s 35-foot game-winner right in the face of PG sent the Oklahoma City Thunder home – resulting in George’s infamous claim, “That was a bad shot.”…” I don’t care what anybody says. That’s a bad shot.” George has now gone on record following the conclusion of 2021 All-Star Game “I guess I was criticized for the right reason for calling Dame’s shot in the playoffs a bad shot,” George playfully admitted. “I mean, I see this guy’s range is crazy. And I mean, it’s not like it’s a half-court heave. These are shots that well in their range. … “It’s a great shot.”

NBA Commissioner, Adam Silver addressed the vocalised dismay with the league’s decision to proceed with an All-Star game but seemed to demonstrate understanding when referring to Lebron’s comments. “It would be incredibly hypocritical of me to tell LeBron you should speak out on issues that are important to you, but not ones when you are critical of the league,” Silver said. “We’re all part of a community. I respect him and his point of view. But at the same time, I also appreciate his professionalism.” … “My sense is he’s going to be here as he always is as a top-notch professional and engaged in the game.”

It seemed as if the players bit the bullet and delivered for the fans and for the league in the 2021 All-Star Game. We witnessed some fantastic showcases of talent and saw some of the league’s biggest stars battle it out with a fun and enthusiastic attitude, leaving us waiting and excited for the remainder of the season to come.