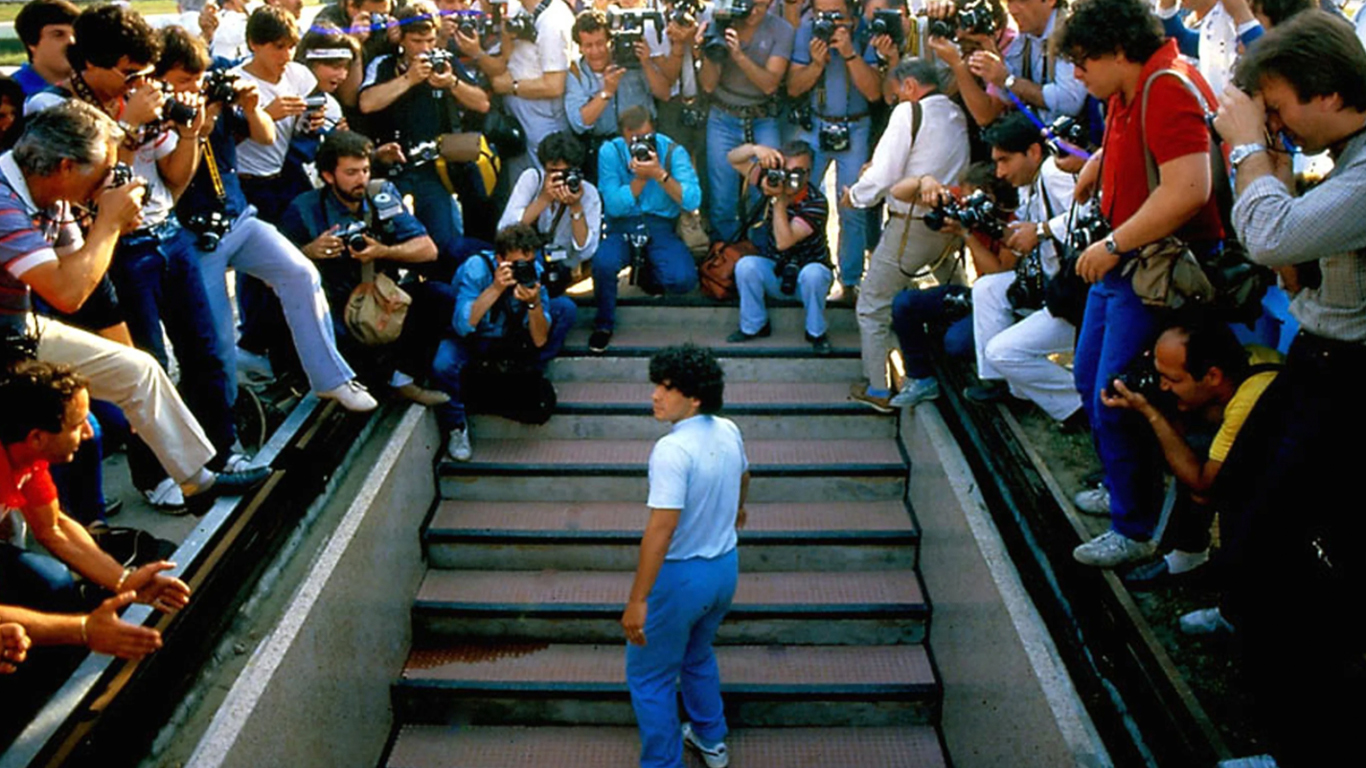 The hand of God. The son of Argentina. Diego Maradona.

At age 16, Maradona was not just a great footballer, he was the fulfilment of a prophecy. Diego Maradona has passed at age 60, the son of a boatman, became a world icon. Argentina during the 1920s was a booming immigrant nation that was searching for its soul—a sense of identity. It’s here football would serve as more than a sporting code, rather a glue barely sticking the population together. It didn’t matter what background or country you came from if you lived in Argentina, you hoped the blue and white stripes won. The striped jersey fast became a national symbol with political and cultural significance.

The notion surfaced, Argentinian football posed a problem to the British game, a quasi-colonial power with very different ideals born at the beginning of the first world war. Across a bed of water, British schools treated football as a symbol of power and stamina. It was played by the wealthy, and loved by the poor. Argentina in contrast, learned the game in the potreros, vacant lots in the slums, on tiny malnourished pitches as hard as cement—crowded and rough. The Argentinian game was a game for the streets. It required cunningness, technical ability and a sense of no compromise.

It was here Diego Maradona would learn how to change the course of football forever. It was here he would learn to win no matter the cost. Maradona’s father was a boatman on the Parana delta, the province of Corrientes. His mother lived in Buenos Aires, where she lived with relatives and was joined by Maradano’s father. Maradona’s father built his house from loose bricks and sheets of metal in Villa Fiorito. The slums of Argentina that were so violent police weren’t allowed to take a permanent residence. They were bussed in by truckloads, only to depart soon after.

While still a toddler, Diego fell into a cesspit. It was here, Diego’s uncle shouted the phrase that Maradona would carry with him the rest of his life.

“keep your head above the shit,” he shouted

Maradona made the ‘coming from nothing’ story his own. Growing up without electricity or running water, the Argentinian made money however he could. He sold scraps, opened taxi doors and collected bits of leftover cigarette packets. His walk to school would become a legend told to children all around the globe. Maradona would walk to school, gathering newspapers off the streets and turning them into a soccer ball, he would juggle the newspaper ball the whole way to school not letting it touch the ground. It was the Argentinian way—to learn with what you had—to give ones-self to the streets and see what it gave you in return.

Copious walks to school and scrap games in the slums gifted Argentina a soldier of the game. Maradona first arrived at the youth side Argentinos Juniors, Los Cebollitas, which stands for ‘the Little Onions’. Right away Maradona became a phenomenon. After a course of pills and injections to build his body up, he began entertaining crowds with tricks no one had ever seen, by the age of eleven, the Argentinian press caught wind of Maradona, it was here expectation would become a familiar friend.

An immature and bold teenager began to realise the rules were not made to be obeyed, but to be broken. His headmaster would turn a blind eye to the missed exams, as Maradona despised losing more than he enjoyed winning. Maradona would move to Boca Juniours in 1981, where an endless amount of friendly games wore and tore at the young teenager’s body. Here, Maradona would be jabbed and given medication to deal with the physical and mental strain.

Fast forward to the Argentinian’s success, 1986 would encapsulate the greatest individual performance at a World Cup. It was here the famous ‘hand of God’ would reign supreme, with Maradona scoring during a game against England in the quarter-finals, June 22nd, 1986 would become a legend etched in football history forever.

Maradona was also treated as a deity for the way he led Napoli to its only two Series A titles — in 1987 and 1990 — where southern Italy found its voice, a far removed socio-economic and geographically isolated section of Italy discovered their hero in the form of the Argentinian.

It must also be noted On the 4th of June 1982 Diego Armando Maradona put pen to paper with FC Barcelona—the best player in the world was finally a Blaugrana.

The game will remember him, Argentina will mourn him and the world will celebrate him. Diego Maradona, rest in peace.

George Clooney Cheated His Will And Gifted 14 Of His Friends $1 Million Each
Here’s The Rock’s Advice For Returning To The Gym And Life
Loading Comments...
%d bloggers like this: